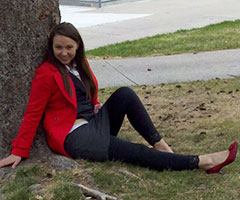 Brittany Griffin graduated with a BA in Journalism from the University of Montana.  During her time at UM, she served as the student President of the Davidson Honors College, which included organizing the University’s Homecoming Dance, speaking at convocations and orientations, and putting together multiple service projects.  Wooley was selected as the lone broadcast student from her class to report on the Montana Legislature for more than 50 radio and television stations across the state.  Immediately following graduation, she landed a job as an on-air television news reporter for the CBS affiliate in Billings Montana.  She had worked in news for a year when she realized how much she missed being immersed in politics.  She is now proud to be doing her graduate studies at the University of Utah and bleeds red.  Wooley has a strong interest in international relations, and is focusing her attention on that area.  While working on her Master’s degree, she is the media director for the GOP Congressional candidate for Utah’s 2nd District, Chris Stewart.