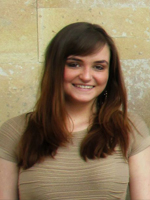 Barbara Roth is a PhD student studying International Relations and Comparative Politics. Her main research focus is on intrastate conflict and international crisis response. She received her B.A. in Political Science and Media Studies from the Freie Universität Berlin in Germany in 2014. As an undergraduate, she completed a full-year academic exchange to the University of California Berkeley, where she worked as a Research Apprentice for the Multicultural Germany Project.

Barbara Roth has also worked as an editorial research intern at Politika, the largest national newspaper in Serbia. She compiled information about ongoing political events for senior editors, assisted with field research and published several articles.

Since she was admitted to the Political Science Graduate Program at the University of Utah in 2014, she has worked as a graduate teaching assistant. She has assisted with introductory courses in International Relations and U.S. Government.

Barbara Roth is currently preparing manuscripts on negotiation patterns in civil wars and reification in genocide scholarship. Her next conference presentations will be at the International Studies Association Annual Convention in 2016.