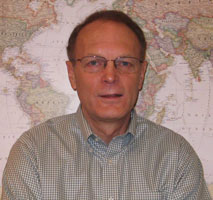 Mark Bean recently retired from his international education administrator position at the U of U, serving for the past five years as Associate Dean for International Programs in Undergraduate Studies and Director of the Center for Learning Abroad. He began work on his PhD in political science (international relations/comparative politics) in January 2003 after working in international business (Asia marketing) for a Salt Lake City based company for seven years. Prior to that, he served in the U.S. Air Force for a quarter of a century as a pilot and international politico-military affairs officer, retiring as a full colonel in 1995. He has Master's degree in economics from UCLA (1971) and Bachelor of Science degree from the U.S. Air Force Academy (1970). He also attended the U.S. National War College in Washington, DC (1987), and as a research fellow with National Defense University, published a book entitled Cooperative Security in Northeast Asia (National Defense University Press, 1990). He has global flying experience, extensive international policy, planning, and business experience in Asia and in Washington, DC. In the early 1990s, he served for two years as the Air Attaché at the U.S. Embassy in Beijing, China.